The two posts previous to this are:-

The radiocarbon dating which, in 2011, finally ended efforts to describe the Voynich manuscript as an autograph by Roger Bacon, also saw the perhaps arbitrary abandoning of his view that the appearance of the manuscript, and the content, suggested origin in works from the thirteenth century.  No-one has taken on the task of testing whether the content mightn’t be a fifteenth-century copy of a thirteenth-century text (by Bacon or anyone else) but another problem with Wilfrid’s narrative is the limited range and type of techniques for enciphering that were known in Europe before 1400. Not that we necessarily accept that the written part of the text is in cipher.

I add the above paragraph as clarification today (29th Dec. 2018) because I hear on the grapevine that this blog, whose aim is to demonstrate the need for a re-visiting and revising of ideas long-held or tenaciously maintained about the manuscript,  is  being rumoured an effort to  re-instate  Wilfrid’s ‘Bacon ciphertext ‘ idea. ….  **sigh**

Note (updated 18th. Jan. 2019).  Whether it still applies, or was just a touch of influenza, just before this post originally went up, Nick Pelling  had said that he felt discussion of  methodologies inappropriate for his site.  Time mellows many opinions, of course.

Bacon  described seven methods by which a text might be rendered obscure in his  De Epistola de Secretis …  (“Letter concerning the marvellous power of art and of nature and concerning the nullity of magic“).

I’ve transcribed the  section in a separate Page (‘see right: Addendum…’). adding some explanatory notes from  John Dooley’s book[J.D.]  and a couple of my own. [D]

The same Page illustrates and links to Aethicus/Ethicus’ alphabet.

( Wilfrid addressed the Philadelphia College of Physicians on the same occasion that  Prof. Newbold delivered the  Fifth ‘Mary Scott Newbold’ lecture.  Newbold held the chair of Intellectual and Moral Philosophy at the University of Pennsylvania, and speaking dates are planned well in advance, so it seems a reasonable assumption that Wilfrid’s invitation was due to Newbold’s good graces.)

Scholars are yet to pay much attention to European ciphers pre-1400, and the seminal paper is still regularly cited:

An English cipher, in de Foxton’s Liber Cosmographiae (composed in Oxford in 1408):

The history of ciphers is older than Bacon, of course.

The cipher, part of which is shown in the header dates to the late tenth century, from the Abbey of Luxeuil and according to the catalogue entry at the British Library reads:

The first reference below describes an ostracon (MMA 14.1.219)  said to date from before the eighth century AD.  I have chosen this example partly for its age,  and partly because the editors describe the cipher as one formed by ‘the mixture of several types of letters’ – which is the fourth method described by Bacon in thirteenth-century England.  That ostracon also lets me send a nod to  Georg Baresch,  who believed the Voynich manuscript contained  ‘ancient’ and ‘Egyptian’ matter  as he made clear when asking Athanasius Kircher’s help to identify  the Voynich script.

Apropos of Baresch’s ‘guess’ that the manuscript’s content relates to medicine:

Several researchers have commented on similarities between the Voynich script and other scripts, including Coptic. One sometimes sees observations of this sort collected – sometimes with attributions included – at agglomerative sites such as  voynich.nu.

Why would Bacon want to write in cipher?

“the Franciscan friar, Roger Bacon, an infinitely greater scholar, who had been persecuted on account of his writings and whose scientific discoveries had been misrepresented as black magic. Moreover, for many years he had been forbidden by his Order to write, and he himself referred in his works to the necessity of hiding his great secrets in cipher.”

As far as I know we have not a  scrap of evidence to show that Roger Bacon ever wrote at length in cipher, and Wilfrid appears not to have known that his conception of Bacon as ‘persecuted scientist’ derived ultimately from the Draper-White thesis, which had been refuted in print four years before Wilfrid laid eyes on his ‘Bacon ciphertext’.

That Dr. White’s book, contradicted as it is so directly by all serious histories of medicine and of science, should have been read by so many thousands in this country, and should have been taken seriously by educated men, physicians, teachers, and even professors of science … only shows how easily even supposedly educated men may be led to follow their prejudices rather than their mental faculties …

And in 1921, Lynn Thorndike  again objected to that ‘persecuted scientist’ notion when writing to Scientific American (see end of post).

Despite objections from persons both intelligent and well-informed, the myth/’theory’ of Bacon’s persecution ‘for science’ continued to be promoted and thus to infect writings for the rest of the twentieth century.  As example of their tone I list the publications from 1922 ( from Reeds’ Bibliography).

When Bacon was censured, it was in England, and as a result of his serving as ‘whistleblower’ when requested by the Pope to write about poor management and practice in the church in England. Others claim Bacon incurred displeasure by taking it on himself to criticise the system of education decided by ‘elders and betters’ in the church hierarchy.

Bacon’s contemporary, Thomas of Cantimpré (1201 –1272), wrote at great length about natural history, in his ‘De naturis rerum‘, a text that was (so to speak) ‘an instant run-away best seller’, being soon  translated into French, Belgian and German vernaculars.  Clearly, ‘natural history’ didn’t have to be hidden in cipher during Bacon’s lifetime.

The following illustration, comparing script in a fifteenth-century copy of  Cantimpré’s thirteenth-century text with script taken from one folio of Beinecke MS 408, was first published by the present author in May 2016.   That post was one item in a  more detailed exposition of  the internal evidence which indicates the content’s evolution over time. The last substantial stratum, prior to the present volume’s manufacture,  I have dated to the period between 1250 and 1330 AD, that conclusion confirming an earlier opinion (by the present author) which had been reached and shared in posts online by 2011.  Certain minor alterations, additions and marginal inscriptions were treated separately.

Postscript:  I am indebted to correspondent for reference to a comment made by Derek J. de Solla Price in 1975, indicating that some had earlier wondered if this might be the case:

In theory –  only in theory –  it could be argued that there is a period of about ten years when Bacon might (just ‘might’) have needed to encipher some text attributed to  Aristotle.

As mentioned in the previous post, the Arts Faculty of the University of Paris were told in 1210 that:

“Neither the books of Aristotle on natural philosophy or their commentaries are to be read at Paris in public or secret, and this we forbid under penalty of excommunication.”

On the other hand, members of the Faculty of Theology could read what they liked, and no prohibition existed at all in England.

Bacon came to Paris while the ban was in place (at least nominally), arriving in 1233/4 and remaining until 1250, according to some accounts.  But the Stanford Encyclopaedia of Philosophy says Bacon was already “teaching Aristotle’s works on natural philosophy and metaphysics by the 1240s”, and a ‘British Heritage’ article says Bacon was invited to Paris in 1241 “to present a lecture series on the Aristotelian corpus.”

Which would leave only the period between 1233-c.1243(?) when it might have been necessary to obscure the content of a notebook or some Aristotelian text.

In Paris again by 1257, Bacon would have now found Aristotle’s works freely available:

By 1255,  all of Aristotle’s works were available plus a range of commentaries and expansions of his ideas. [These] were not only widely read in Paris but were prescribed texts in the Arts Faculty. 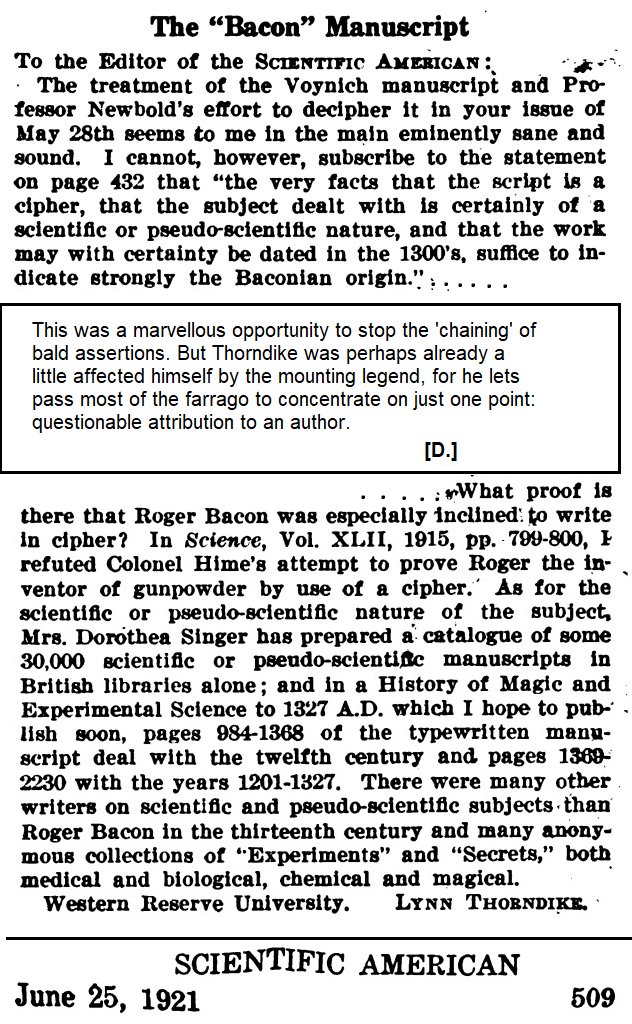 One thought on “Wheat from the Chaff – ‘Bacon ciphertext’”