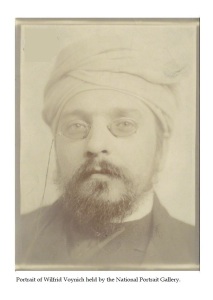 As we do what Wilfrid should have done, testing his assertions severally against the secondary  evidence and the manuscript’s own testimony  –  it becomes clear that Wilfrid’s “history” for the manuscript is anything but. His failure to establish the truth of what he said about the manuscript  before making those assertions public – and the failure of others to do so before adopting them, meant that the manuscript’s study was misdirected from the first, and researchers diverted into innumerable dead-ends simply because their first premises – their ‘givens’ – were groundless.  The habit is still widespread by which  a fictional narrative ( habitually if wrongly called ‘theory’) is first promoted and  its success thereafter evaluated  by the number of believers – but not  by what demonstrable value it has for a more accurate understanding of the manuscript – not of its materials, nor of what it was intended to convey. We’ll look at this in more depth when considering false analogies, false equivalents and ‘argument from association’. (List of logical fallacies)

His imagining the text written in Bacon’s own hand is unjustified.   To suppose   Bacon or anyone else might encipher an entire book about  ‘natural history’ in the mid-thirteenth century runs counter to the historical evidence; there is no evidence to support the idea that Bacon ever enciphered an entire book, either  – not about natural history or anything else.  And the content which Wilfrid imagined (‘natural history’) cannot be accepted at face value,  given the lack of evidence for Bacon’s ever being afraid to speak of such matter  and the wide enthusiasm which met Cantimpré’s book on that subject – despite its using Aristotle and being written in 1230-1245, during the ‘ban’ years:  (see previous post).

To believe that Voynichese is unreadable because written in a Baconian cipher demands, today, not only suspension of disbelief but its elevation beyond this mortal world –  for if Bacon’s methods of encryption were unsophisticated, modern decryption algorithms are not.  And there is the other point – that whether or not our present manuscript was made in Latin Europe, there is no way to know yet where the content was first enunciated, nor whether the text’s underlying language (if any) is European.  Such things are also treated as ‘givens’ – maintained without critical scrutiny since 1921 and despite the very obvious fact that if the text or the imagery conformed to Latin European practice, the latter, in particular, would not have proven illegible in those terms – for a century.

And finally, as we’ve seen,  Bacon’s sentence from De secretis..  (‘he’d be a fool….’ ) is neither a text’s justification nor the manifesto which it is so often portrayed as being.  It is, rather, part of an introduction to a subject  which Bacon thought might prove useful at some later time.

On the other side of the scale, one item is potentially in favour. Bacon was much impressed by the Secretum Secretorum. It can be called a book of secrets, was attributed to Aristotle and its title might suggest a need to keep its content secret, even though it is just as much a text in the tradition of the ‘Mirrors of Princes’.

… To the modern reader expecting to encounter some mysterious, arcane wisdom, these works are bound to be disappointing. What was revealed, typically, was not the lore of ancient sages or magi, but recipes, formulae, and “experiments”, often of a fairly conventional sort, associated with one of the crafts or with medicine: e. g., quenching waters for hardening steel, recipes for dyes and pigments, instructions for making drugs, and “practical alchemical” formulae such as a jeweller or tinsmith might use. When a medieval or sixteenth century writer claimed to have discovered a “secret,” he often had this meaning in mind; and when a contemporary library catalogue referred to a “book of secrets,” it usually indicated a compilation of such recipes…

….They exist in countless medieval Latin and vernacular manuscripts, and in printed books of almost every European language. Nor did these writings disappear with the “triumph of modern science” in the seventeenth century. Despite [Thomas] Browne’s warning, books of secrets continued to be written, copied, published, and read by a sizeable portion of the reading public, and by some whom all would agree were among the leading scientific personalities of the day….

That’s exactly how Roger Bacon understood the matter, too.  His ‘scientist’ is master of practical techniques and know-how –  as we see in Bacon’s letter to Pope Clement (1267):

Hence he  has peered into all the processes of smelters, of goldsmiths, of silversmiths, and of other workers in metals and minerals; he knows everything pertaining to war, weapons and hunting; he has examined everything pertaining to agriculture, surveying and other occupations of the countryman; he has even taken into consideration the experiments of witches and their fortune-telling and charms and those of magicians in general, likewise the tricks and illusions of legerdemain — so that nothing worth knowing might remain unknown to him and that he might know what to condemn as due to sorcery or magic.

Nick Pelling is among those who have  believed  that the Voynich manuscript may be a ‘book of secrets’.  For details see (e.g.)

Today we deny Aristotle’s authorship, but Bacon and his successors did not, so I have omitted ‘pseudo-‘ from the heading.

One reason Bacon expended so much energy on his project  [an edition and commentary on the ‘Secretum Secretorum’] is that he valued [the text] as possibly Aristotle’s greatest production. Not only did it impart sage counsel on issues of morality, politics, and health: Bacon, for example, ate rhubarb on the Secretum‘s advice, and felt much the better for it!   In addition, Bacon believed the Secretum treated important subjects deliberately omitted in the books Aristotle wrote for a general audience.

Origin of the Latin versions:

Salim Abu l-ʿAla’, secretary to the caliph Hisham ibn ʿAbd al-Malik (r. 724–743), initiated the translation of the pseudo-Aristotelian letters on government to Alexander the Great.  This collection forms the nucleus of the most famous among the “mirrors for princes”, the Sirr al-asrar…, known in the Latin Middle Ages and early modern times as the Secretum secretorum. One of the Arabic translations of the pseudo-Aristotelian De Mundo also traces back to this period… However, it was under the ʿAbbasids (750–1258), and in particular in the first two centuries of their caliphate, that the translations blossomed.

In the introduction to the work as we now have it we are told that it was translated from Greek into Rumi, and from Rumi into Arabic, by Yuhanna ibn el-Batrik (or Ibn Yahya al-Batrik). Rumi is the common word for Syriac, when it does not mean Greek, and Yuhanna, who died a.d. 815, was a well-known translator, physician of Al- Ma’mun, who is said to have rendered the Politics and the Historia Animalium into Syriac, and the De caelo et mundo and the De anima in epitome, with other works, into Arabic. There does not seem anything obviously unlikely about the statements that a Syrian text has existed, and that it was translated into Arabic about the beginning of the ninth century by Ibn al-Batrik, while it is to be hoped that English scholars, at any rate, have dropped the pose that a manuscript attribution is a decisive argument against the supposed author or translator having any connexion with the work.

A curious confirmation of the possible existence of a Syriac version has lately turned up in the publication by Dr. Budge of a thirteenth-century collection of medical treatises and receipts in Syriac (Syrian Anatomy, Pathology, and Therapeutics, 2 vols., London, 1913). Among them (ii. 540) is the formula for calculating victory by taking the numerical value of the names of the generals and casting out the nines (see pp. Ix, 250). This formula is identical with one which exists in both forms of the Arabic text, though it is omitted in the Vulgate Latin version.

It is unlikely that the Syriac text, if it should ever be found, will bear the name of the Secret of Secrets. Perhaps the traditional name preserved by Al-Makin, The Book of the knowledge of the ‘ Laws of Destiny, or the Kitab-al-siyasa of Ibn Khaldun, its alternative title in Arabic, may afford some clue.

Yela Schauwecker here presents us with an Old French translation of those sections of the pseudo-Aristotelian ‘Secretum secretorum’ pertaining to diatetics, detailing which items are beneficial for each part of the body, and the qualities of various foodstuffs.  The edited text also features the much briefer passages which precede these and which relate to the benefits of doctors, prayer and astrology.   The translation is of particular philological interest because it involves the collaboration of an Irish Dominican author (Geoffrey of Waterford), composing in Anglo-Norman, and his Walloon scribe, Servais Copale. Until recently, Schauwecker’s base manuscript BNF, fr. 1822 was believed to be the only extant manuscript preserving Geoffrey’s translation.

Next post: Bacon’s De Secretis in re  Hime’s “gunpowder cipher”